Nice little Halloween treat over the weekend.  A rogue trailer for American McGees’s Alice 2 was released.  Although it is much more a teaser, it’s better than what we have gotten over the years which has been more speculation than anything else.

I for one loved the hell out of the original and this just gets me more and more excited for the sequel to one of my favorite PC games ever.  A macabe version of Alice in Wonderland, complete with blood, gore, dementia, and spookiness.  Check out the video, but expect to wait a long time for this one still.  2011 to be exact.

Hey, at least it’s gonna come out before the world ends in 2012 right?

Left 4 Dead 2’s Demo is available as of yesterday (If you didn’t know already) and you can play it only if you have it reserved.  There were codes given out to the people who reserved a copy that have to be activated through XBL or through Steam.

First off there are new guns and a there are a lot of them.  Ak-47’s Combat Rifle, Assault Rifle, Long-Barrelled Shotgun, Combat Shotgun, Magnum ( Infinite ammo since it’s a pistol), Sniper Rifle etc.  Also there are a bunch of Melee Weapons to replace your pistol if you so choose to.  From what I gather, they all perform the same action and damage so your free to choose the one to your liking.  I prefer the Electric Guitar.  A new addition to the throwables is the Boomer Bile.  I absolutely love the addition of this as when you throw it, The explosion acts like the Boomer’s vomit from the first game.  Hit a Tank with it, and watch the tank get mauled by zombies.  It’s awesome.

Add the fact that you have the 3 Special infected from the first game, and now 3 news ones, and you have a game that is much more a sequel then a cheap cop-out of an add-on.  The Spitter is all about launching an acidic attack from long rang, with AOE effects.  Charger will run at you and grab a character and then pummel them mercessily until stopped, and lastly is the Jockey who jumps on a character and then gains control of their movements.  Usually he will take you into the fray and force your group to chase after you.

All in all, this demo is good.  All the nay-sayers out there might change their tune once they play.  It may not be for everyone, but with the game being much different than Call of Duty Modern Warfare 2 I think this game has a real decent shot this year considering what its up against.

The Demo goes live for everyone else on November 3rd.

No dumpster Love in the motherland

I don’t intend to make a big deal out of this, but I find the “Trial and Fail” aspects of the story fairly entertaining.  I mainly say this because, of the groups that try to impose their reasoning on gamers. The notion that we would ever decide to go along with something like this, it blows me away.  Where to begin?

END_OF_DOCUMENT_TOKEN_TO_BE_REPLACED

Its been 2 full days since Uncharted 2 came out and I decided to go on the grind to get this review out for you.  Playing both nights till I fell asleep with the controller in my hand I went through a lot to get you this review in a timely fashion, and I accomplished that.  This isn’t normally the case for our site but when a game is this good, and you just feel that need to keep going, its worth it in the end.

Uncharted 2: Among Thieves, is being hailed as the best game on PS3, a game that feels more like a blockbuster movie,  a great contender Game of the Year,  and overall acclaim for accomplishing such a feat in 2 years.  It is all this and a bag of chips.  This game is beyond good, and you owe it to yourself to play it.  Without further ado, let’s get to reviewing…

END_OF_DOCUMENT_TOKEN_TO_BE_REPLACED

This week, Square-Enix updated the official Final Fantasy XIV site with some new information.  They added a substantial list of creatures that will be in the game, a few you might remember if you played FFXI ( Raptor, Ahriman, Cactuar, etc. ) and a bunch of ones that you have not seen yet.  What I found to be pretty cool was the “core” Items that are shown as loot for each one.  However, at the same time, they don’t have a listed information section for each creature so you’ll just have to wait for the next update.

They also included some more about the jobs, and the day to day activities you can expect from the game.  While not a huge update, they do just enough to keep you interested and hoping the game will be just as good if not better than FFXI when it releases next year.  They even changed the page music too!

Still waiting on a beta release, but I’ll be sure to keep you posted.  For now head over to the official site to check out the new details.

Unfortunately not often enough, does an RPG come around that instantly captures exactly what makes an RPG good.  There are plenty of RPG’s that follow the formula but don’t deliver once the game is finished.  Thinking back to the days of the PS1 when RPG’s were at their high point, It seemed like every one of them was a treasure.  Those days are gone for the most part with the shelves being flooded with a new JRPG (Japanese Role Playing Game) every other week.  I thought back to the PS2 and with the exception of a few Final Fantasy’s there wasn’t much that really made me reminisce about the system.  And also now with the inclusion of 3 newer systems that have 3-4 under their belts I can’t really say RPG’s have made any comeback.

This is where the DS, in my opinion, has really shined since its release.  I can count at least a good 10 RPG’s that really have made the system stand out the way the PS1 did.  With tons of remakes, ports, and even original RPG’s I have really filled that gap by owning a DS over the years.  And it keeps getting better now that the newest Mario and Luigi RPG game has been released, and it is unlike any other RPG out there.  And that’s a good thing.

END_OF_DOCUMENT_TOKEN_TO_BE_REPLACED

I was asked by the US Government, NATO, NAACP, NAFTA, United Nations, Republic of China, and the NRA to share my thoughts on what we all think is the biggest Issue facing our respective Countries, and Organizations.  They have commissioned me to write an article depiciting the horrible attrocities that we are all share no matter what we represent, or where we come from.  It’s a plague on humanity, a Black Death if you will, that affects us all.  Grab a cup of coffee, and prepare yourself for an article that will shake the very ground you walk on, and make other issues like “Army recruitment Video Game Centers” a thing of the past.  That’s child’s play to this.

I’m talking about Little King’s Story for the Wii.  Yeah, terrifying isn’t it?  We need you, as people of world, to stand in unison, throw away your petty differences and join together.  We must all play this game, and help put a stop to Shovel-Ware once and for all.  This game is great.  It exceeds initial impressions and expectations, and is a treasure to behold on a system with such a small list of good games.

This is our fight, Welcome to Earth!

END_OF_DOCUMENT_TOKEN_TO_BE_REPLACED 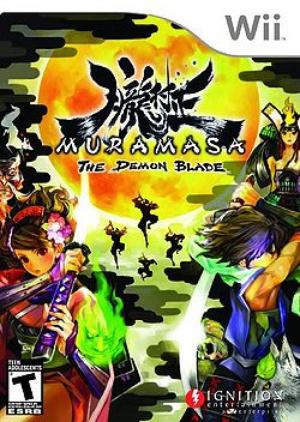 Fast forward now to the release of Muramasa – The Demon Blade.  I had seen movies and screen shots of it, but it just seemed like a new side-scrolling beat-em-up with pretty graphics.  I was very mistaken, as I was overcome with addiction from the very beginning of the game.  I have finally picked up that Wii Remote again… It still feels good.

END_OF_DOCUMENT_TOKEN_TO_BE_REPLACED

It’s been a few weeks now since Gencon ended, but the experience has stayed with me.  I wanted to wrap things up with a gallery of pictures I took while I was there, and also some thoughts on things I didn’t cover in full.  I’ll be talking about Mindflex by Mattel, Word of the Street by Out of the Box, and The World of Warcraft TCG by Upperdeck.  So without further delay…