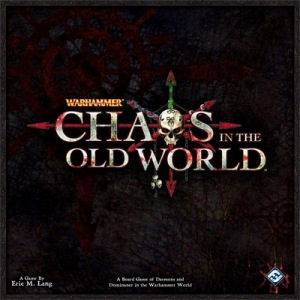 When I had first heard about Warhammer: Chaos in the Old World, I was knee deep in the Warhammer Fantasy thanks to Warhammer Online.  Logan and I were agents of Chaos in this venerable franchise’s first foray into MMO’s and it felt good to be evil.  Imagine my glee when I heard that Fantasy Flight Games announced Chaos in the Old World, where you play one of the four gods of Chaos vying for control of some of the very lands my character was roaming in Warhammer Online.  While the previews that Fantasy Flight had on their blog were able to satiate my desire a little to play this game, the month of September felt too far away to get my hands on it.  Luckily, the game was being demoed and sold early at Gencon ‘09 and I was able to score a copy.  Shortly afterwards Dave, Logan, and I sat down to take up the mantles of Tzeentch, Khorne, and Nurgle.  Impressions after the jump.

END_OF_DOCUMENT_TOKEN_TO_BE_REPLACED

PNG Bro-down Episode 30 – Better than Beyonce Welcome to a very special PNG Bro-down recorded with the power of the internets.  The always changing line up sees a special return appearance on this now venerable podcast.  We chat about all things … Continue reading →

PNG Bro-down Episode 27 – Rogues Do It From Behind

PNG Bro-down Episode 27 – Rogues Do It From Behind It’s that time of the week again, PNG fans!  It’s the Pixels and Grids Bro-down!  On this week’s cast, we talk about all the fun we had at Gen Con … Continue reading →

PNG Bro-down, The Gencon Chronicles Ep2 – So Many Games, So Little Time

PNG Bro-down, The Gencon Chronicles 09 Ep2 – So Many Games, So little Time The crew sits down to talk about what we’ve been playing and who we’ve been talking to on the show floor in our second episode of … Continue reading →

I’m Apparently a Couple Weeks Late to This Party…

After all of my griping about lack of board game news, I realize that I let this announcement from Fantasy Flight slip by me back on May 27th.  Apparently they announced a Warhammer Fantasy board game Called Chaos in the Old World for this fall.  I’ve become quite a fanboy of the Warhammer Universe as of late with the release of Warhammer Online and Dawn of War II so I will gobble up as much news as I possibly can.  You can find their first preview of Chaos in the Old World here.  It’s all about the Chaos army kids!

Also, If there are any Warhammer Online players reading this, be aware that if you nab a first run copy of this game it will net you two dope in game items.  Take a look at the announcement link above for more details.